Prices for wind energy have hit rock bottom as the market has expanded, driven by technology innovation, industry maturation, and macroeconomic factors. Initially these cost reductions materialized in onshore wind, but cost declines have accelerated for offshore wind over the last five years. Given these cost-cuts, are the opportunities for significant additional cost reductions tapped out? Recent research suggests that some energy planners, analysts, and policymakers run the risk of underestimating both the potential for and uncertainty in wind energy cost reductions.

A new study, recently published in the journal Nature Energy, summarizes a global survey of 140 of the world’s foremost wind energy experts to gain insight into the possible magnitude and sources of future cost reductions. It follows from a similar survey executed five years ago, and was led by Berkeley Lab, the National Renewable Energy Laboratory, the U.S. Department of Energy, and the University of Massachusetts.

﻿Wind costs have plummeted in recent years. The levelized cost of energy (LCOE) of onshore wind in the U.S. now averages $35/MWh, with power sales agreements often signed at below $20/MWh, according to research from Berkeley Lab (Figure 1). And records continue to fall offshore, with developers competing to have the lowest, cut-rate offers in both Europe and the United States. 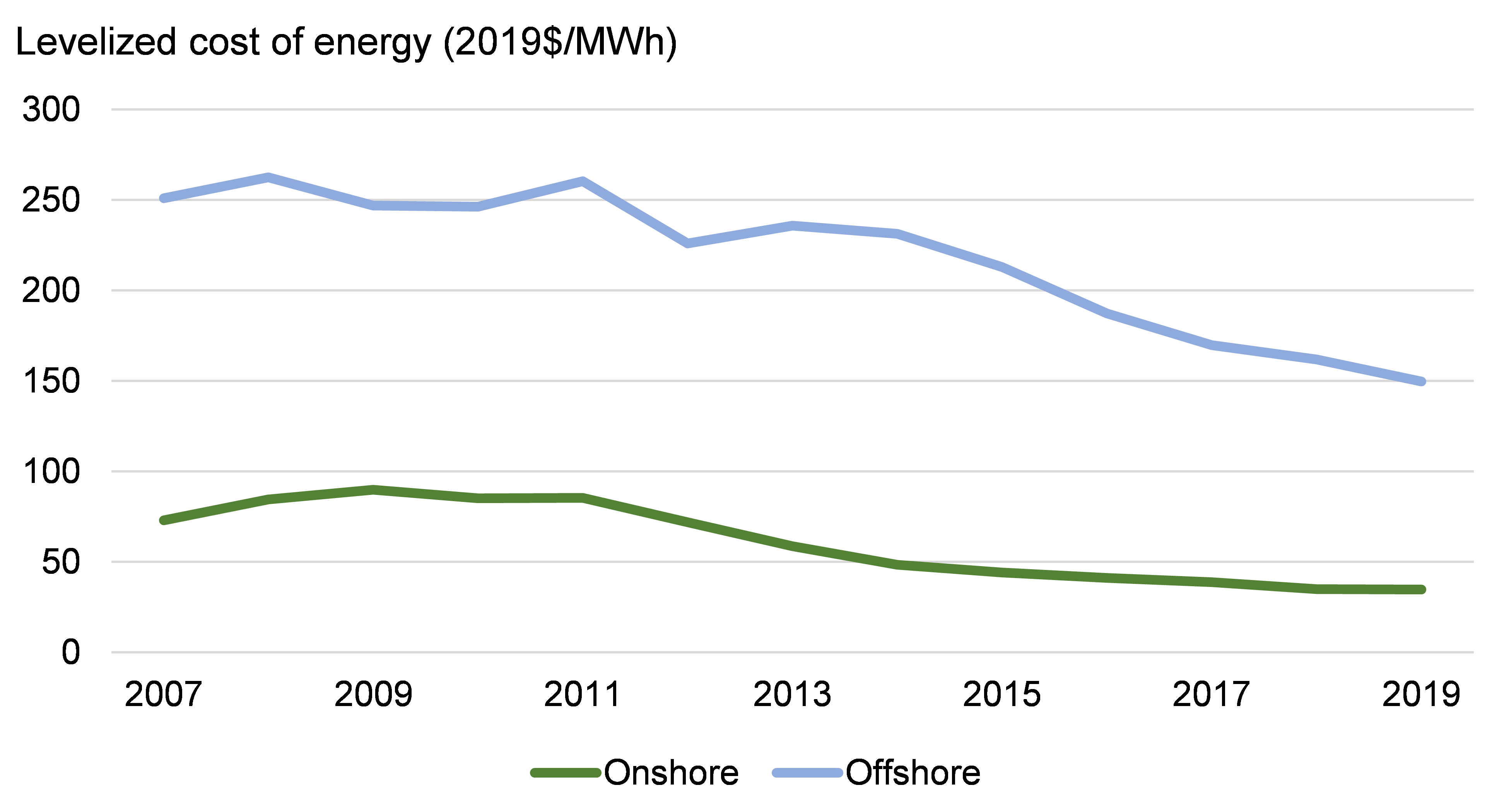 The magnitude of recent cost reduction is an historical anomaly. For example, we estimate that the ‘learning rate’ for onshore wind levelized costs over the last five years has averaged 35-46%—an astounding two to four times greater than the long-term historical trend. In absolute and relative terms, the cost of offshore wind declined even more rapidly over the same time period.

﻿The pace of cost reduction experienced in recent years was not anticipated by most experts and forecasters. Figure 2 shows estimates of actual (realized) onshore and offshore wind costs from 2014 to 2019-20, and contrasts those data points with our previous expert survey results from 2015. Clearly, the experts from 2015 got it wrong, even in their 10% probability ‘low cost’ estimates. And, as pointed out in the Nature Energy article, they were not alone. Virtually all forecasts from the 2015 time period have been proven, to put it bluntly, wrong. 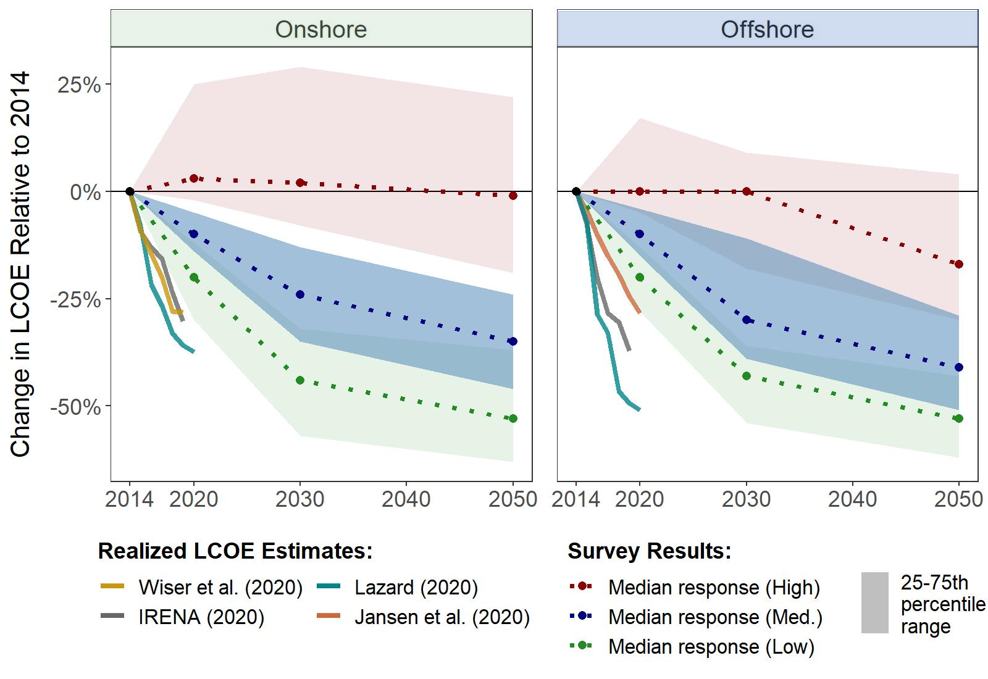 Why the inaccurate forecasts? We can only speculate, but plausible reasons include cost pressures from increased use of competitive auctions, rapid growth in turbine size, speedier industrialization of non-turbine aspects especially offshore, and low interest rates and materials prices.

Where Will Wind Costs Go From Here? Hint, hint… down

﻿With such dramatic advancements, it is tempting to believe that the opportunity for significant additional cost reduction might be tapped out. Recent survey findings suggest otherwise.

As shown in the new Nature Energy article, survey respondents anticipate cost reductions of 17%–35% by 2035 and 37%–49% by 2050 across the three wind applications studied, relative to 2019 baseline values. There are greater absolute reductions in the levelized cost of energy for offshore wind compared with onshore wind, and a narrowing gap between fixed-bottom and floating offshore wind. Experts now anticipate future onshore and offshore costs that are half that which was predicted just five years ago, in 2015 (Figure 3). 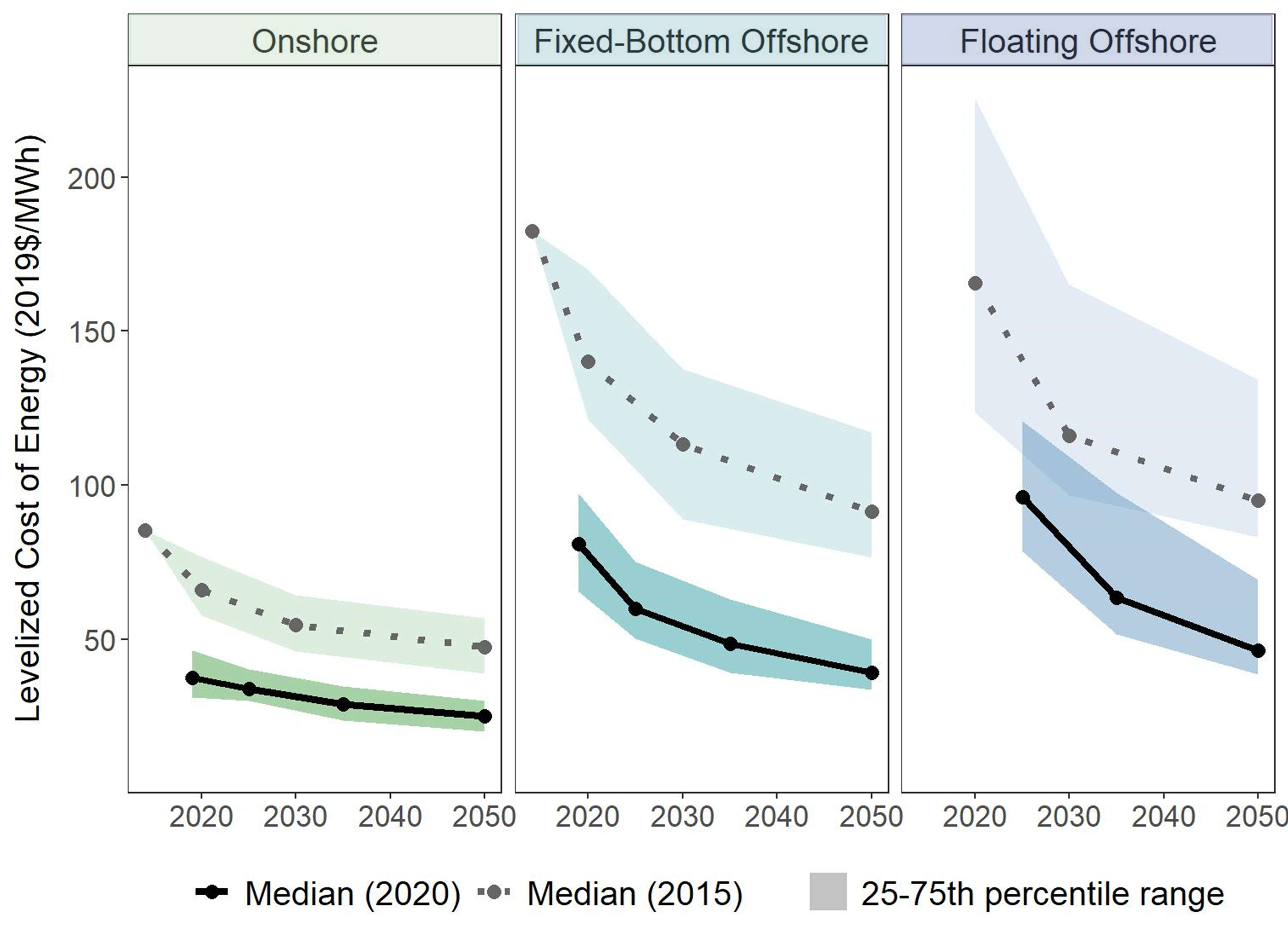 Notwithstanding these findings, it’s also important to appreciate the degree of uncertainty in cost forecasts. Humans are not especially good forecasters. One need only look back to the wind cost forecasts and expectations published in or around 2015 to see that. One can also look to the recent survey results. For example, the 25th–75th percentile ranges in the best-guess median scenario (shown in Figure 3) suggest uncertainty in cost reductions. The extent of those uncertainties is further confirmed by the experts’ levelized cost predictions across three scenarios, including both low-cost (only 10% chance costs will be lower) and high-cost (only 10% chance costs will be higher) cases (Figure 4). Under the low-cost scenario and across all applications, experts predict reductions of 38%–53% by 2035 and 54%–64% by 2050. The high-cost scenario suggests that slower reductions or even near-term cost increases are possible.

Figure 4. Estimated change in wind LCOE over time across all three scenarios.
Note: Floating offshore wind is compared against the 2019 baseline for fixed-bottom offshore.

Comparing the Expert Survey to Other Recent Forecasts

How do the recent survey results compare to other contemporaneous forecasts? It’s a mixed bag.

For onshore wind, the experts’ perspectives for future levelized costs are pretty consistent with long-term historical learning. As shown in Figure 5, the experts are a bit more optimistic about future costs than several other forecasts, due to lower assumed starting-point baseline values, stronger percentage cost reductions, or both. Though not depicted in the figure, the experts also appear to be more optimistic than assumptions in most Integrated Assessment Models—the models most typically used in climate change discussions. In other cases, the experts are more conservative. For offshore wind, survey results in terms of percentage cost reduction relative to a recent-year baseline are more conservative than many other recent forecasts. However, these differences are largely due to different baseline values: absolute LCOE estimates in 2030 and beyond are highly consistent across all of these sources, except the U.S. Energy Information Administration, which projects higher costs. Assumptions used in Integrated Assessment Models again appear conservative, relative to expert assessments.

Figure 5. Comparison of 2020 survey results with other contemporaneous LCOE forecasts.

Most importantly, with a couple notable exceptions, uncertainty in future costs is not considered in the other forecasts. These forecasts largely offer point estimates. As such, the expert survey results provide an important source of additional information by estimating uncertainties.

What Have We Learned?

Expert elicitations are only one means of gazing into the crystal ball. And, as with other forms of prognostication, expert surveys have their limitations. Sadly, the energy community does not have a strong history of successfully predicting the future—few communities do.

Humility noted, the research in Nature Energy does hold a couple important implications.

First, there is significant uncertainty about future cost reductions. An expansive range of possibilities exist. This should give pause to those who use point forecasts for future costs, and demonstrates why modelers should account for cost uncertainties. More generally, the work illustrates the importance of fully considering uncertainty in energy policymaking, planning, investment, and research decisions.

Second, notwithstanding the above caution, there is a risk of understating the cost reduction potential of wind, both onshore and offshore. It certainly happened in 2015. Wind energy cost reductions have accelerated over the last five years—much more than earlier predicted. And experts anticipate significant future reductions, driven not only by reductions in installed costs but also lower operational expenses, higher capacity factors, longer design lives, and lower financing costs. As levelized costs decline, additional focus may turn to the value of wind in energy markets, and to the many barriers that hinder deployment – these and other important factors will be explored in more depth in forthcoming research led by NREL and Berkeley Lab, also leveraging the expert survey. Overall, these trends and expectations might enable wind to play a larger role in global energy supply than previously thought while facilitating energy-sector decarbonisation. Best not to ignore that potential.

The study was led by Berkeley Lab, and included contributions from the National Renewable Energy Laboratory, the U.S. Department of Energy, the University of Massachusetts, and scores of other advisors. The survey was conducted under the auspices of the IEA Wind Technology Collaboration Programme (www.ieawind.org). Berkeley Lab’s contributions were funded by the U.S. Department of Energy’s Office of Energy Efficiency and Renewable Energy.

The Nature Energy article can be found here. A PowerPoint-style briefing that summarizes the survey findings in greater depth is also available, as is a 2-page factsheet; all files can be downloaded here.