Climate pollutants like methane and soot don't stick around in the atmosphere as long as carbon dioxide does, but they have far greater heat-trapping potential. A new study led by researchers at Lawrence Berkeley National Laboratory (Berkeley Lab) finds potential for China to cut emissions of these short-lived gases by up to 40% in 2030.

Reducing all greenhouse gas emissions is essential to the international climate goal of limiting the global average temperature increase to 1.5 °C. The study looked specifically at international best practices to limit short-lived climate pollutants including methane, fluorinated gases (F-gases) such as hydrofluorocarbons, nitrous oxide, and black carbon (the main component of soot).

The results, which were published in the journal Science of the Total Environment, show cost-effective reduction potential of 30–40% by 2030 and 56% by 2050 for methane, f-gases, and nitrous oxide in China compared to 2015 levels.

"The vast majority of research related to climate change has been on carbon dioxide," said Nina Khanna, principal scientific engineering associate at Berkeley Lab. "These short-lived climate pollutants are a new area of focus, and the science shows that they are important contributors to global warming in the near term."

Methane, for example, has more than 80 times the warming potential of carbon dioxide over 20 years and about 30 times as much over 100 years. Nitrous oxide is 273 times more potent over both time periods.

The study's authors first assessed international policies aimed at reducing these pollutants, then looked at the areas of opportunity for China and the average abatement cost for different measures.

For the latter part of the study, they combined modeling and scenarios with cost-curve analysis of mitigation measures in specific sectors such as oil and gas extraction, coal mining, waste, and agriculture, to see how technical measures in each sector could achieve reductions. The results showed a cost-effective reduction potential of 35% for methane, 30% for F-gases, and 40% for nitrous oxide in 2030, relative to 2015 levels. 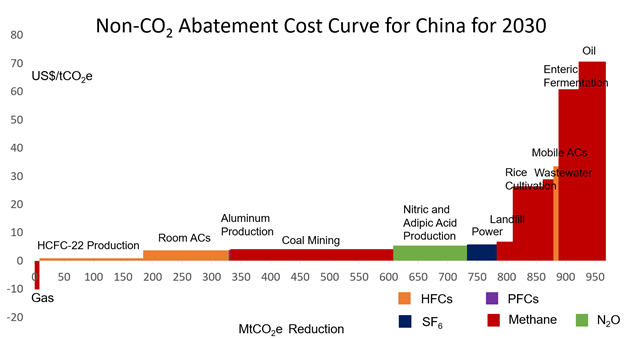 The above chart shows the Non-CO2 Abatement Cost-Curve for China for 2030, showing average abatement costs by gas and subsector. Credit: Berkeley Lab

China has committed to carbon neutrality by 2060, and the study authors recommend reduction targets for short-lived climate pollutants in support of this goal.

"China is one of the leading emitters in the world of methane and other short-lived climate pollutants. Taking decisive actions in this decade on reducing these climate pollutants not only supports China’s long-term carbon neutrality goals but would also have the benefits of reducing air pollution and impacts on food production," said Jiang Lin, Berkeley Lab staff scientist and lead author of the study.  "As the largest emitter of greenhouse gases and the second largest economy in the world, China is in a unique position to spur global action."