Falling battery prices and the growth of variable renewable generation are driving a surge of interest in “hybrid” power plants that combine, for example, wind or solar generating capacity with co-located batteries. While most of the current interest involves pairing photovoltaic (PV) plants with batteries, other types of hybrid or co-located plants with wide-ranging configurations have been part of the U.S. electricity mix for decades.

A newly released briefing from Lawrence Berkeley National Laboratory tracks and maps existing hybrid or co-located plants across the United States while also synthesizing data mined from power purchase agreements (PPAs) and generation interconnection queues to shed light on near- and long-term development pipelines. This work follows earlier Berkeley Lab research that analyzed the motivations and options for deploying hybrid plants within the bulk power system, as well as the value of co-locating hybrid plant components relative to siting them independently.

The scope of this data summary includes co-located hybrid plants that pair two or more generators and/or that pair generation with storage at a single point of interconnection, and also full hybrids that feature co-location and co-control. ‘Virtual’ hybrids that do not include co-location are excluded. The focus is on larger, 1 MW+ systems; smaller (often behind-the-meter) projects are also increasingly common, but are not included in this data synthesis. This briefing is accompanied by two data visualizations, one focused on online projects and the other on those in interconnection queues.

Based in part on Form EIA-860 data, there were at least 226 co-located hybrid plants (>1 MW) operating across the United States at the end of 2020, totaling more than 30 GW of aggregate capacity (see map below). Among these operating plants, the most common configuration is PV+storage (with 73 projects totaling 992 MW of PV and 250 MW of storage), followed by several different fossil hybrid categories (34 fossil+PV, 29 fossil+hydro, and 21 fossil+storage plants—each dominated by the fossil component) and 14 wind+storage plants (with 1,425 MW wind and 198 MW of storage). But there are roughly a dozen other configurations as well, each numbering in the single digits and including wind+PV, wind+PV+storage, biomass+hydro, geothermal+PV, and others. 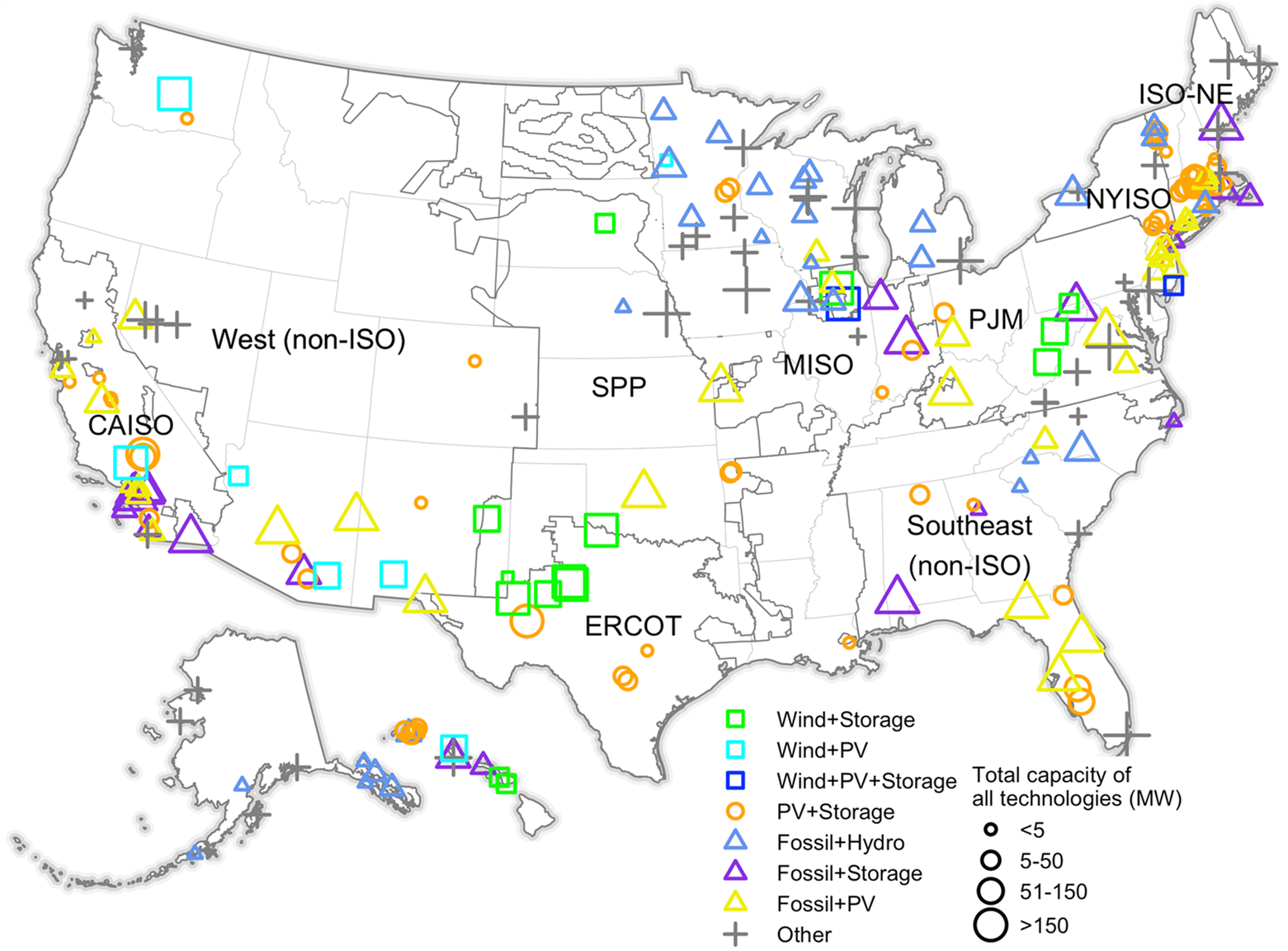 Among the existing generator+storage hybrids, the storage:generator capacity ratios and storage durations are highest, on average, when storage is paired with PV. This suggests that PV+storage hybrids are used to serve arbitrage and capacity needs in addition to delivering ancillary services. Storage paired with wind and fossil assets, meanwhile, has largely been intended to meet ancillary service needs, to date.

Data on projects under development from the interconnection queues of all seven ISOs/RTOs plus 35 individual utilities demonstrate considerable commercial interest in hybrid power plants, and especially in solar co-located with storage. At the close of 2020, there were more than 460 GW of solar plants in the nation’s queues; 159 GW (~35%) of this capacity was proposed as a hybrid, most typically pairing PV with battery storage (PV+storage represented 88% of all hybrid capacity in the queues). For wind, 209 GW of capacity sat in the queues, with 13 GW (~6%) proposed as a hybrid, again most-often pairing wind with storage (wind+storage represented 4% of all hybrid capacity in the queues). While many of these specific projects will not ultimately reach commercial operations, the depth of interest in hybrid projects—especially PV+storage—is notable.

PV+storage plants can be found in interconnection queues throughout the United States, but most prominently within California and the non-ISO West. Proposed wind+storage and standalone storage plants also center on these regions of the country (see maps below). In CAISO, 89% of all solar capacity and 37% of all wind capacity in the queues is proposed as a hybrid. Commercial interest in California no doubt derives from the state’s energy policies, but is also driven by the pronounced daily wholesale pricing patterns induced by high solar penetrations that create arbitrage opportunities for storage that do not yet exist in the same magnitude in most other wholesale markets.

While queue data have the advantage of being comprehensive (in that entering the queues is a necessary step in the development process), the queues do not provide much plant-level detail, and also contain many speculative projects (i.e., completion rates are low). To get a better sense for what the near-term pipeline looks like, we also track data on PV+battery hybrids that have announced offtake arrangements. Securing offtake (e.g., through a PPA) is a critical step towards raising financing, thereby providing some confidence that these are “real” rather than speculative projects.

A sample of 134 such projects suggests that the near-term development pipeline features longer storage durations and higher battery-to-PV capacity ratios than are seen among existing hybrids. DC-coupled battery configurations will also likely become more common, and a subset of these DC-coupled plants (particularly those in Hawaii) plan to employ very high DC:AC ratios and store the otherwise-clipped power, leading to expected AC capacity factors in excess of 40%. Finally, PPA prices from a subset of these PV+battery plants reveal that the cost of adding storage increases linearly with the battery:PV capacity ratio, and that PPA prices have declined over time despite increasing (on the mainland) or stable (in Hawaii) battery:PV capacity ratios (see graphs below).

Although data on hybrid plants are still rather limited, this synthesis of available data shows that a variety of hybrid or co-located plants already exist within the U.S. electricity generation mix—and that these operating plants will soon be eclipsed by the large amount of hybrid capacity working its way through development pipelines. The vast majority of this impending hybrid capacity will be configured as PV+storage, with much of it located in California and the rest of the West. Moreover, these new PV+storage hybrids will, on average, look a little different than existing plants, generally featuring larger batteries with longer durations, as the cost of batteries continues to decline.

For further details on these and other findings, please refer to the short PowerPoint-style data compilation, which can be downloaded here. The briefing is also accompanied by two data visualizations, one focused on online projects and the other on those in interconnection queues. In addition, the authors will present this work during a free webinar on Wednesday, August 18 at noon eastern; register here: https://lbnl.zoom.us/webinar/register/WN_MR_zb7sqTiib2LPIraGwFg.