The share of variable renewable energy (VRE)—mainly solar and wind—generation on U.S. regional power systems more than doubled on average from 2012 to 2018, according to the newly released 2018 Renewable Energy Grid Integration Data Book. 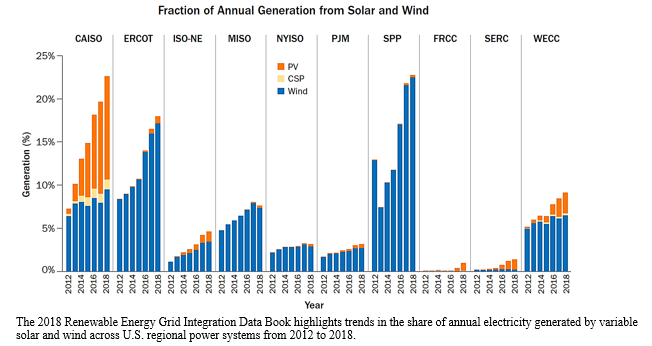 Produced by NREL’s Strategic Energy Analysis Center and LBNL’s Electricity Markets and Policy Group, the Renewable Energy Grid Integration Data Book is intended to provide an overview of selected grid integration metrics that reflect recent changes to the operation and composition of the power system as VRE sources increase their shares of electricity supply.

“These grid integration metrics indicate how much VRE is currently being integrated onto the grid throughout the regional U.S. power systems,” said NREL Analyst Yinong Sun, lead author of the Data Book. “We also highlight trends that may reflect the extent of the challenges associated with integrating VRE generation onto the grid.”

The data and content presented focus on the year 2018. Some historical data and content are included to provide context for the broader electric sector and market environment for VRE integration.

Other key insights from the data include:

NREL is the U.S. Department of Energy's primary national laboratory for renewable energy and energy efficiency research and development. NREL is operated for the Energy Department by The Alliance for Sustainable Energy, LLC.