The latest edition in an annual series, the study is based on address-level income and other demographic estimates for roughly 1.9 million residential rooftop solar adopters across the country, representing 82% of all U.S. systems installed through 2019. The study updates and expands upon previous editions, describing solar-adopter income trends as well as trends in home-value, credit score, education, occupation, rural vs. urban, race and ethnicity, and age.

The report, which is primarily descriptive and data-oriented, complements and informs other ongoing work at Berkeley Lab surrounding issues of solar energy access and equity. This includes an online data visualization tool, in-depth analyses around drivers and potential solutions to solar-energy adoption inequities, and technical assistance to other organizations. Information about these related efforts is available at solardemographics.lbl.gov.

The authors will also host a webinar highlighting key findings from this study on April 22, 2021, at 11:00 AM Pacific/2:00 PM Eastern. Register for the webinar here: https://lbnl.zoom.us/webinar/register/WN__MjzhMTKTy-sKA_pJYRb5A.

Key findings from the study include the following:

Solar adopters generally skew towards higher incomes, though that trend continues to diminish over time. Nationally, solar adopters’ median household income was roughly $113,000 in 2019, compared to the U.S. median of $64,000, or $74,000 if comparing just to owner-occupied households (Figure 1, left). That disparity has narrowed over time, with the gap between median incomes for solar adopters and all households shrinking by roughly one-third, from $72,000 in 2010 to $49,000 in 2019 (Figure 1, right). That downward trend in solar-adopter incomes is associated primarily with third-party owned (TPO) systems, as median adopter incomes for host-owned systems have remained relatively flat over time.

Solar adopter incomes vary considerably and encompass many low-to-moderate income (LMI) households. Notwithstanding the general skew toward higher incomes, solar adopters span all income ranges. Among 2019 adopters, 42% had household incomes below 120% of their area median income (AMI), a benchmark sometimes used to define LMI households, while 21% were below 80% of AMI, a more-stringent threshold often used to define low-income. Those percentages have risen over time, as solar adopters have trended toward lower income households (Fig. 2, left). Solar-adopter incomes also vary considerably from state-to-state, with median solar-adopter incomes ranging from roughly $70k to $140k and from 104% to 162% of AMI (Fig. 2, right). That state-level variation partly reflects general geographical differences in income levels and income inequality within the broader population, but characteristics of state and local solar markets play some role as well (as other work by Berkeley Lab has sought to show). To be sure, solar-adopter incomes presently skew high in all states, but, as with the national trends, that skew has diminished over time in most states. Solar-adopter incomes also vary across individual installers, but skew high for almost all firms. 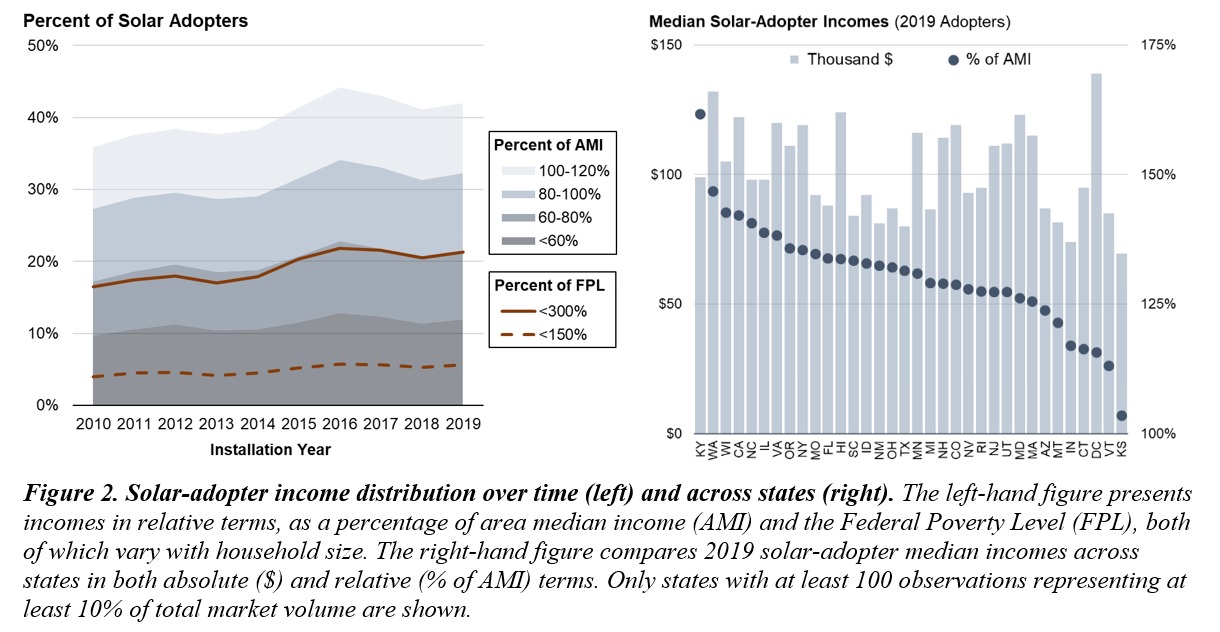