Berkeley Lab is pleased to announce a new article recently published in the Journal of Renewable and Sustainable Energy, titled “System-Level Performance and Degradation of 21 GWDC of Utility-Scale PV Plants in the United States.” This study finds that first-year performance generally lives up to ex ante expectations, while the rate of performance decline over time depends on factors such as plant vintage, size, location, and configuration.

In this article, we assess the performance of a fleet of 411 utility-scale (i.e., >5 MWAC and ground-mounted) PV projects totaling 21.1 GWDC (16.3 GWAC) of capacity that achieved commercial operations in the United States from 2007-2016. This fleet of utility-scale projects contributed more than 50% of all solar electricity generated in the United States in 2017 (with most of the remainder coming from residential and commercial PV systems, as well as utility-scale concentrating solar thermal power plants).

Using detailed information on individual project characteristics (e.g., fixed-tilt vs. tracking, azimuth, tilt, DC:AC ratio, location), in conjunction with satellite-based, modeled irradiance data for each site, we assess the extent to which actual first-year system-level performance has lived up to both modeled and stated expectations. We then analyze system-level performance decline in subsequent years by employing a “fixed effects” regression model to statistically isolate the impact of age on system performance.

We find that this fleet of utility-scale PV projects has generally lived up to ex ante expectations for first-year performance on average—and that this finding holds true whether expectations are based on modeled performance for a typical meteorological year (Figure 1a) or instead on first-year generation estimates stated within power purchase agreements (Figure 1b). 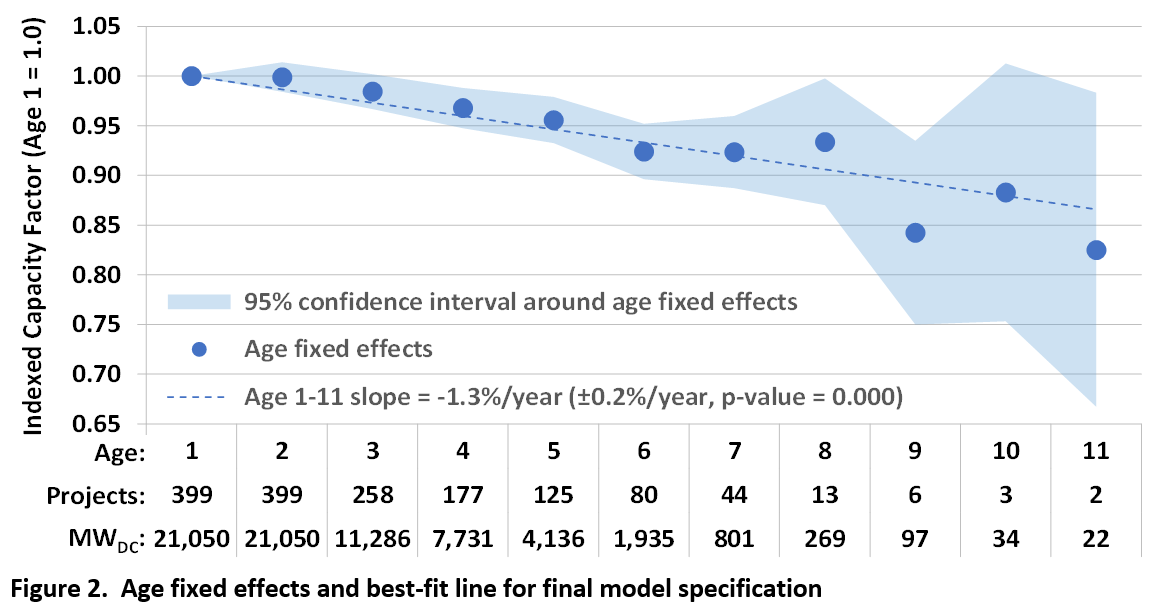 In subsequent years, we find an average system-level performance decline of -1.3%/year (±0.2%) for the entire sample of projects (Figure 2). This average rate, however, varies depending on a number of factors that we were able to differentiate with at least some statistical significance. For example:

Although the specific thresholds chosen for each of these sample bifurcations are somewhat arbitrary, the findings are nevertheless intuitive. For example, we would expect the reliability of photovoltaic technology to have improved with time, and for larger projects to receive more attention than smaller in terms of maintenance and repair protocols. Likewise, higher temperatures are known to negatively affect PV module efficiency, and have also been found to be positively correlated with performance degradation. Finally, higher DC:AC ratios will tend to mask some system-level performance degradation due to power clipping, as degraded DC power output that is further reduced or “clipped” by an inverter operating at its maximum capacity has no chance of contributing to system-level performance degradation.

We emphasize that the degradation rates estimated through our analysis and cited above are system-level estimates that capture more than just module-level degradation. In other words, they reflect the cumulative impact of a variety of events that could negatively affect system-level performance over time, such as soiling, balance of plant degradation, and downtime for maintenance.

Berkeley Lab will hold a free, half-hour webinar to present the study on July 22nd at 9:00 AM Pacific/12:00 PM Eastern. Register here: https://lbnl.zoom.us/webinar/register/WN_9sp4NS2yRYaxRistV10LUA

We thank the Solar Energy Technologies Office (SETO) within the Office of Energy Efficiency and Renewable Energy (EERE) at the U.S. Department of Energy (DOE) for funding this work.