Electric utility customers spent about $5.8 billion on energy efficiency programs in 2016 to cost-effectively offset a portion of growth in U.S. power needs. That, in turn, affects the need for investment in new electricity infrastructure, across generation, transmission and distribution systems. A new study by Berkeley Lab provides a bottom-up assessment of the potential impact of existing and likely state policies and market conditions to promote or constrain future spending and savings for electricity efficiency programs funded by utility customers in all U.S. states.

A public webinar on the report, The Future of U.S. Electricity Efficiency Programs Funded by Utility Customers: Program Spending and Savings Projections to 2030,was held on December 12, 2018 and a recording of that webinar is posted here.

The new study includes three scenarios—low, medium and high cases—for 2030, with projections of spending and savings for interim years (Figures 1 and 2). 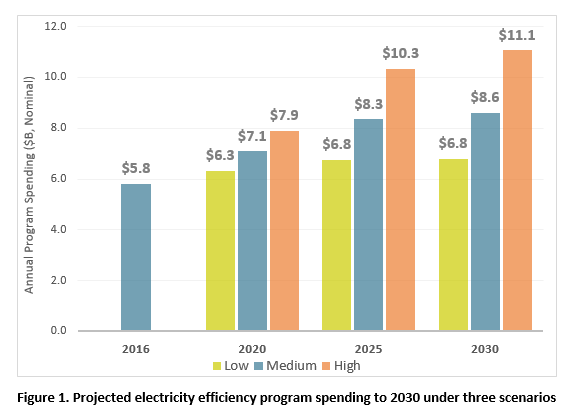 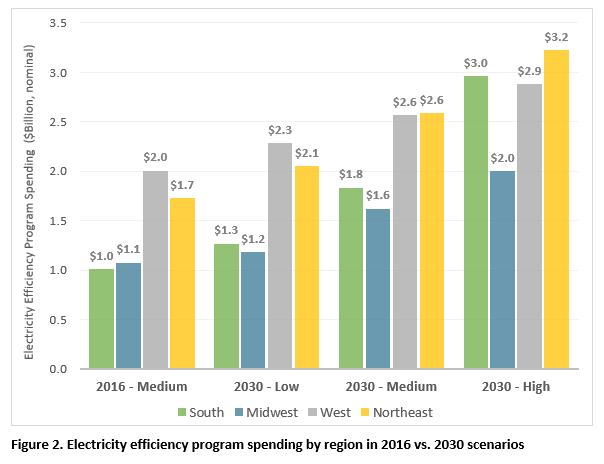 The scenarios represent different pathways for the evolution of electricity efficiency programs funded by utility customers given the current policy environment and uncertainties in the broader economic and state policy environment in each state.

The study considers key policy drivers in each state, including energy efficiency resource standards, statutory requirements that utilities acquire all cost-effective efficiency or include efficiency under state renewable portfolio standards, voluntary savings targets, public (or system) benefit charges that fund efficiency, integrated resource planning requirements, demand-side management plans, and policies intended to reduce utilities’ disincentives or provide financial incentives to promote energy efficiency. Among the policy constraints included in the study are caps on program spending or rate impacts, as well as allowing large commercial and industrial customers to opt out of efficiency charges and programs.

Among the key findings of the study:

While the study does not envision or quantify the impact of potential new drivers and delivery mechanisms, it highlights emerging challenges in developing a cost-effective portfolio of efficiency programs:

“Looking to 2030, utilities and other program administrators will grapple with significant challenges to develop a cost-effective portfolio of electricity efficiency programs,” said Chuck Goldman, Berkeley Lab Staff Scientist and lead author of the report. “For example, new lighting standards will supplant much of the historic reliance on financial incentives for lighting improvements, and programs may increasingly need to pay attention to the time- and location-dependent value of energy efficiency.”

The degree to which program administrators and states address these emerging challenges is likely to heavily influence the long-term pathway for spending and savings on efficiency programs.