While lower prices are good for consumers, this decline in market value is not as good for producers. It could potentially limit wind and solar deployment and thus endanger decarbonization goals.

A new study from Berkeley Lab, appearing in the journal Joule, looks at how market value – defined as the value of energy and capacity in regional power markets – changes over time at 2,100 utility-scale power plants across major power markets, with data through 2019. Note, the air quality, public health, and environmental benefits of wind and solar generation are not incorporated in these value calculations (see our past research on these topics).

The study looked at three drivers of market value: 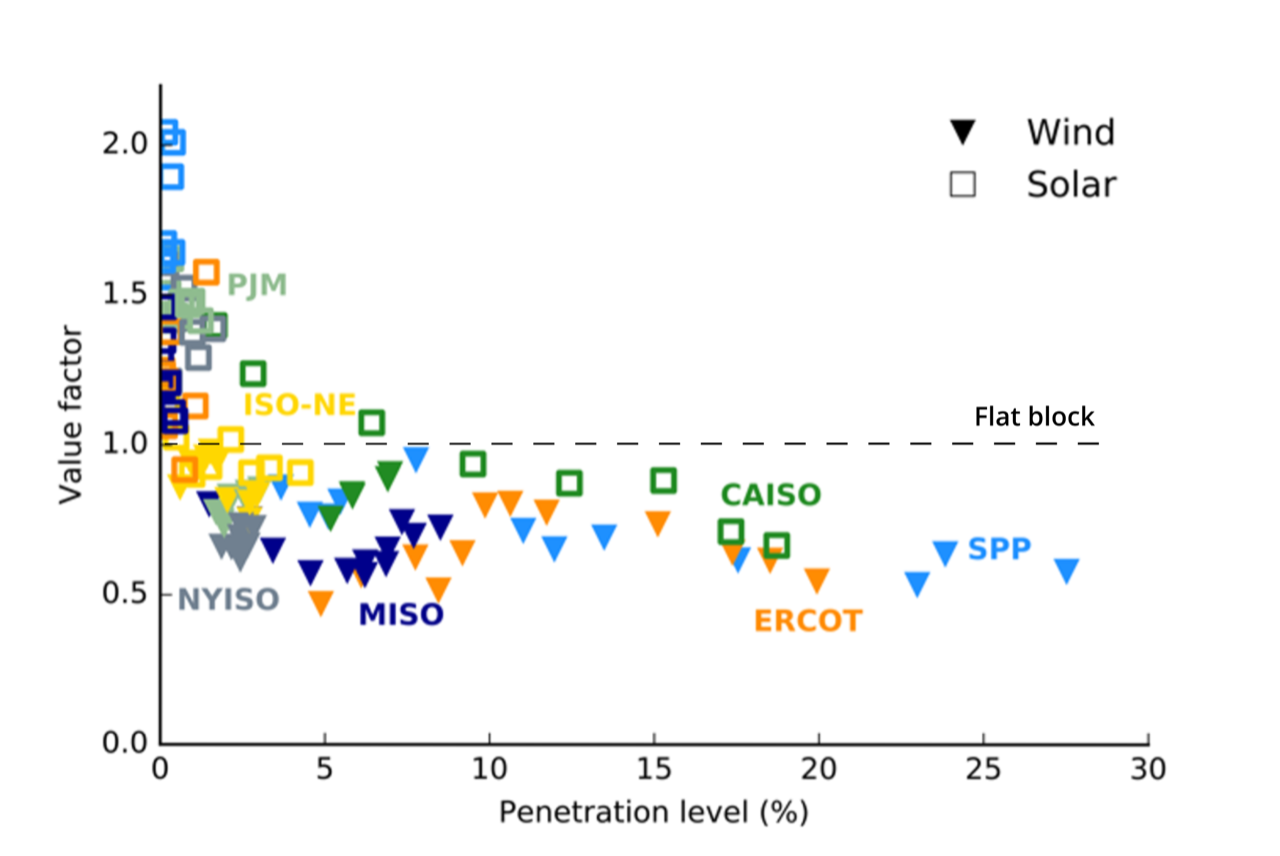 Figure 1. Annual wind and solar value has declined with increasing penetration levels. “Value factor” is the ratio between wind or solar value and an average regional metric of value based on a flat, or ‘always-on’ generator, which has a value factor of 1.0.

We analyzed the causes of variances in 2019 market value, focusing on the impact on value of output profiles, congestion, and curtailment (see Figure 2).

Wind power in ERCOT (in Texas) and the Southwest Power Pool (SPP) region, which includes wind-heavy Oklahoma and Kansas, saw market values at 46% and 42% below the flat block value of generation, due mostly to congestion and output profile effects.

Solar, meanwhile, saw a 37% market value penalty (i.e., reduction from flat block value) in CAISO, as California solar is large enough that it has driven down market prices during sunny hours, and hence its own market value. California vastly outpaced other regions in solar penetration, providing 19% of total power generation.

Yet for regions with less than 3% solar penetration, solar had a market value premium (value greater than a flat block), especially in ERCOT and SPP. In all cases, the primary driver was the coincidence of the output profile with relatively high hourly market prices. 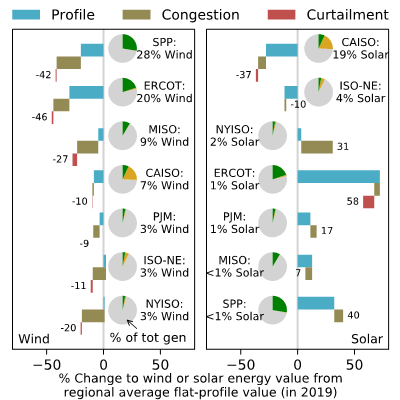 Figure 2. Energy value penalties and premiums in 2019 by region. The percent change shown is relative to the average value of a flat profile at all generators in each region. Pie charts show the penetration by wind and solar in each region.

But can wind and solar costs keep up that pace of decline? Or will future market value declines outpace future cost drops? What can be done to mitigate value decline?

How To Minimize Market Value Decline

Strategies to minimize a decline in market value must be matched with its cause in each region. For example, building more intra-regional transmission will relieve congestion penalties, but may provide only limited benefits where the output profile is mismatched with higher market prices. Instead, shifting the output profile through energy storage, or shifting the profile of electricity demand through new rate structures, demand response, or flexible loads like electric vehicles would be more effective in these regions.

Solar seems to be particularly sensitive to a decline in market value due to its output profile and developers have responded by shifting to “hybrid” plants – especially solar paired with battery storage. Recent declines to the costs of batteries have enabled this growth of solar-plus-storage plants. For wind, the shift to larger blades, relative to turbine capacity, allows for improved generation during low wind speeds, boosting capacity factors and effectively flattening the output profile and reducing profile penalties.

Conclusion: A mix of optimism and caution

There is a good chance that market values will decline as penetration levels rise, but ongoing cost drops and performance gains have helped to maintain the value proposition of wind and solar, and are likely to continue.

Measures to mitigate market value decline may be needed, and these can be targeted by region and technology. The rise of hybrid generation + storage plants allows for greater flexibility in future deployment and operations. Expanded transmission capacity can reduce congestion effects and inter-regional transmission can connect wind and solar to regions with higher market prices at advantageous times. Plus, increased electrification of transportation and buildings may change load profiles and allow additional flexibility from the demand side.

Ultimately, there is a race between cost and value, as utilities, developers, and entrepreneurs search for profitable solutions. Berkeley Lab will continue to track the race with annual reports and updates.

The article in Joule, “Solar and Wind Grid-System Value in the United States: The Impact of Transmission Congestion, Generation Profiles, and Curtailment,” is ‘open access’ and available to all: https://doi.org/10.1016/j.joule.2021.05.009

If you have any questions, please contact Dev Millstein (510) 486-4556, DMillstein@lbl.gov, at Lawrence Berkeley National Laboratory.