We are pleased to announce the publication of a new report that documents past progress in power-sector decarbonization. Sharply reducing carbon emissions is imperative to prevent the worst effects of climate change. Yet even in the power sector—often viewed as the lynchpin to economy-wide decarbonization, and where low-carbon solutions are increasingly plentiful and cost-effective—the pace and scale of the required transformation can be daunting. As documented in the new report, however, the U.S. power sector has already made significant progress in reducing emissions.

Fifteen years ago, many business-as-usual projections anticipated that annual carbon dioxide (CO2) emissions from power supply in the United States would reach 3,000 million metric tons (MMT) in 2020. In fact, direct power-sector CO2 emissions in 2020 were 1,450 MMT—roughly 50% below the earlier projections. By this metric, in only 15 years the country’s power sector has gone halfway to zero emissions. Other metrics also evolved differently than projected: total consumer electricity costs (i.e., bills) were 18% lower; costs to human health and the climate were 92% and 52% lower, respectively; and the number of jobs in electricity generation was 29% higher. Economic, technical, and policy factors contributed to this success, including sectoral changes, energy efficiency, wind and solar power, continued operations of the nuclear fleet, and coal-to-gas fuel switching. 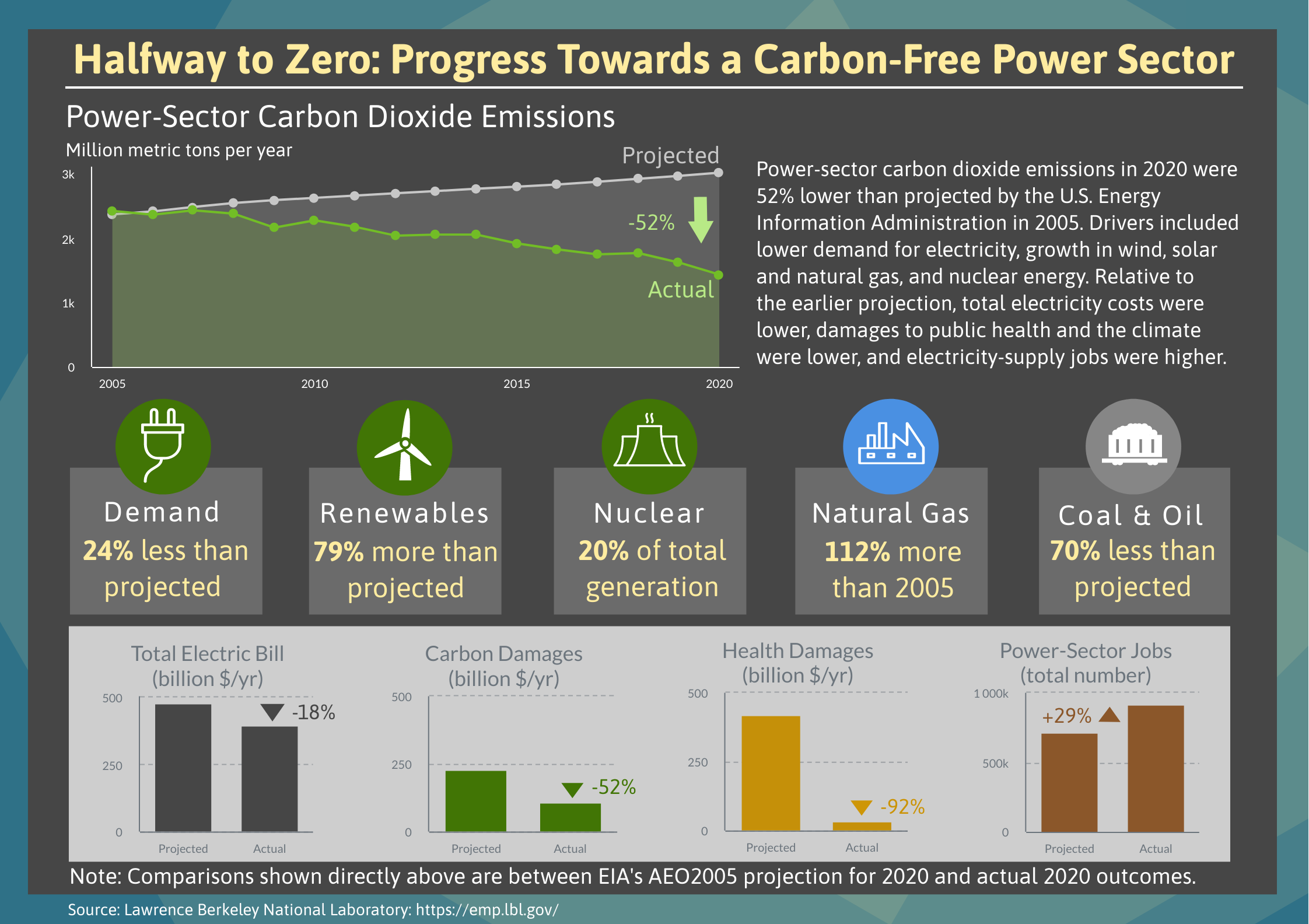 In additional detail, some of the study’s key findings include:

Lower Emissions: The U.S. power sector looks radically different from projections made 15 years earlier. Compared to a range of past business-as-usual projections, in just 15 years the country’s power sector has marched halfway to zero emissions. For example, the U.S. Energy Information Administration’s (EIA’s) 2005 Annual Energy Outlook projected that CO2 emissions from power supply would be 3,008 MMT in 2020. In fact, emissions in 2020 were 1,450 MMT, 52% lower than projected. The results for 2020 reflect the impact of COVID-19 on the power sector: the reduction in emissions relative to EIA’s earlier projection drops to 46% if 2019 data are used. Comparing 2020 power-sector emissions with 2005 emissions shows a 40% reduction.

Drivers for Progress: The emissions reductions stem from a diverse array of policy, market, and technology drivers. Electricity demand was 24% lower in 2020 than projected by EIA owing to sectoral and economic changes, and to greater energy efficiency driven by policies and technology advancement. Wind and solar delivered 13 times more generation in 2020 than projected, also a result of technology development and state and federal policies. Nuclear energy continued to produce 20% of total electricity generation, carbon free. Finally, coal-to-gas fuel switching played a crucial role, with natural gas generation growing rapidly, driven by the shale gas revolution.

Limited National Consumer Electricity-Cost Impacts: Retail electricity prices in 2020 were similar to those in 2005, but higher than projected. Total retail sales in 2020 were considerably lower than anticipated. Consequently, total customer electricity bills in 2005 and 2020 were similar, and 2020 bills—at $391 billion—were 18% lower than the projected $477 billion. These comparisons do not directly capture the cost of carbon reduction and are greatly impacted by the steep decline in gas prices. However, they indicate that national average electricity expenditures are roughly the same today as in 2005, and they are well below previously projected values.

Lower Health and Climate Burdens: Climate damages from power-sector emissions in 2020, estimated at $110 billion, were less than half the $229 billion that would have been incurred under the EIA projection. Health costs, at $34 billion, were cut by more than 90% relative to the $419 billion projected for 2020. Premature deaths from power-sector air pollution in 2020 (3,100 lives lost) were just 8% of what might have been under the business-as-usual trajectory (38,000 lives lost). In total, the calculated social cost of power supply—considering electricity bills, climate damages, and health impacts—in 2020 of $535 billion was 44% lower than in 2005 ($948 billion) and 52% lower than projected for 2020 ($1,124 billion).

National Power-Supply Job Gains: Electricity-supply related employment in 2019 was 29% higher than might have been the case under the projection for 2020, because renewable energy requires more jobs per unit output than natural gas and coal. As a result, though jobs in the coal sector are considerably lower than might have been the case, natural gas and especially renewable energy jobs boost the overall total to 920,000. Naturally, the regional distribution, required skills, and compensation associated with the employment shifts are also crucial.

Looking Forward: Recent research suggests that wind, solar, and energy storage—along with energy efficiency and existing low-carbon resources such as nuclear—are likely to play important near-term roles in further power-sector decarbonization. More than half of the additional wind and solar capacity needed to approach a zero-carbon power-sector target is already in an early stage of development: about 660 gigawatts of wind and solar are seeking approval for future transmission access (along with 200 GW of storage). Dramatically expanding these resources to become major contributors to power supply requires addressing numerous technical, economic, institutional and societal challenges. Were additional technology solutions to become available, even faster and more aggressive decarbonization would be feasible. Moreover, for power systems relying on large volumes of wind, solar, and batteries, the incremental cost of carbon reduction begins to rise more steeply as emissions decline and eventually approach zero. Further RD&D on the numerous technologies that can fill this gap in the puzzle is needed, to enable technology portfolios that minimize incremental costs in deep decarbonization scenarios.

It is significant that the nation has cut power-sector carbon emissions over the last 15 years. But past success does not trivialize the challenges that remain for further decarbonization. Nor does it offer a specific roadmap for how best to achieve additional emissions reductions—future strategies will likely differ from those of the past. Moreover, if the United States is to progress on a deep decarbonization pathway, it must absorb the likely near-term rebound in emissions post-COVID, and then once again beat business-as-usual projections. And it will need to accelerate emissions reductions outside the power sector, where progress to date has been less significant.

As the country maps out a plan for further decarbonization, experience from the past 15 years offers two central lessons. First, policy and technology advancement are imperative to achieving significant emissions reductions. Second, our ability to predict the future is limited, and so it will be crucial to adapt as we gain policy experience and as technologies advance in unexpected ways.

A link to the report can be found here.

The research was led by Berkeley Lab and included contributions from the National Renewable Energy Laboratory and the U.S. Department of Energy.