The amount of new power generation and energy storage in the transmission interconnection queues across America continues to rise, reaching a new record of over 750 GW of generation and an estimated 200 GW of storage capacity at the end of 2020. To put that in perspective, the United States had 1,117 GW of total utility-scale electricity generating capacity in operation last year.

A new slide deck, data file, and interactive visualization from Lawrence Berkeley National Laboratory synthesize data from transmission interconnection queues throughout the United States to illustrate trends in proposed power plants across time and regions. The data indicate considerable developer interest in solar, wind, storage, and natural gas, as well as growing interest in hybrid plants that combine multiple generation types and/or storage at the point of interconnection.

Solar (462 GW) accounts for a large – and growing – share of generator capacity in the queues. Substantial wind (209 GW) capacity is also in development, 29% of which is for offshore projects (61 GW). In total, about 680 GW of zero-carbon capacity are currently seeking transmission access, along with 74 GW of natural gas capacity. 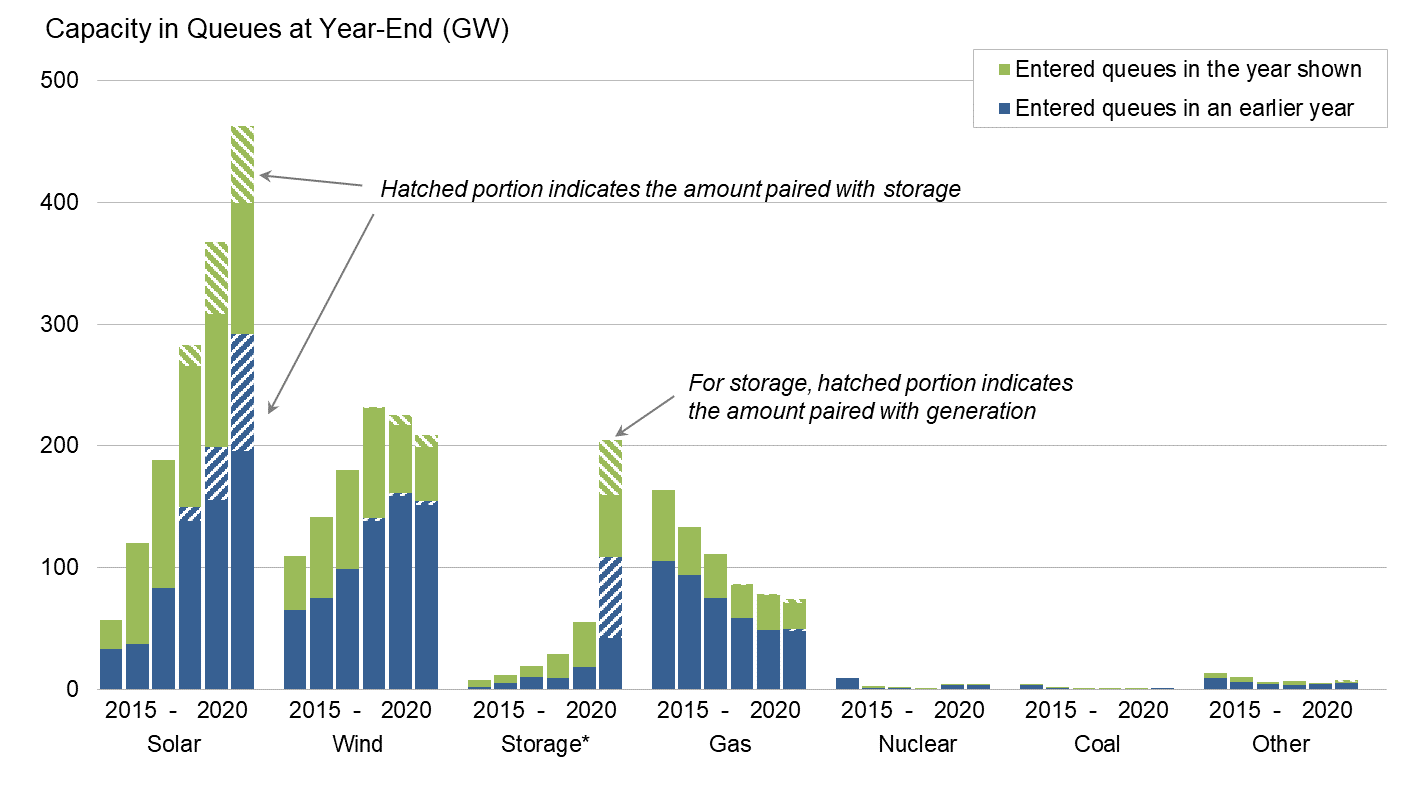 Figure 1: Total capacity in interconnection queues over time. *Hybrid storage capacity was estimated for some projects using known generator:storage ratios, and was not estimated for years prior to 2020.

As shown on the map, the solar capacity in the queues is distributed across most U.S. regions, including most notably PJM (89 GW), the non-ISO West (88 GW), ERCOT (65 GW), MISO (64 GW), Southeast (57 GW), and CAISO (47 GW). Wind capacity in the queues is highest in SPP (46 GW), NYISO (34 GW), and the non-ISO West (33 GW), but with sizable amounts (>10 GW) proposed in all regions except the Southeast. Although proposed wind capacity has contracted in some regions, it continues to grow in those with proposed offshore wind projects, like NYISO, PJM, and ISO-NE. Natural gas proposals center on the Southeast (39 GW) and PJM (10 GW), while standalone storage has concentrations in the CAISO (23 GW), the non-ISO West (16 GW), and PJM (15 GW). 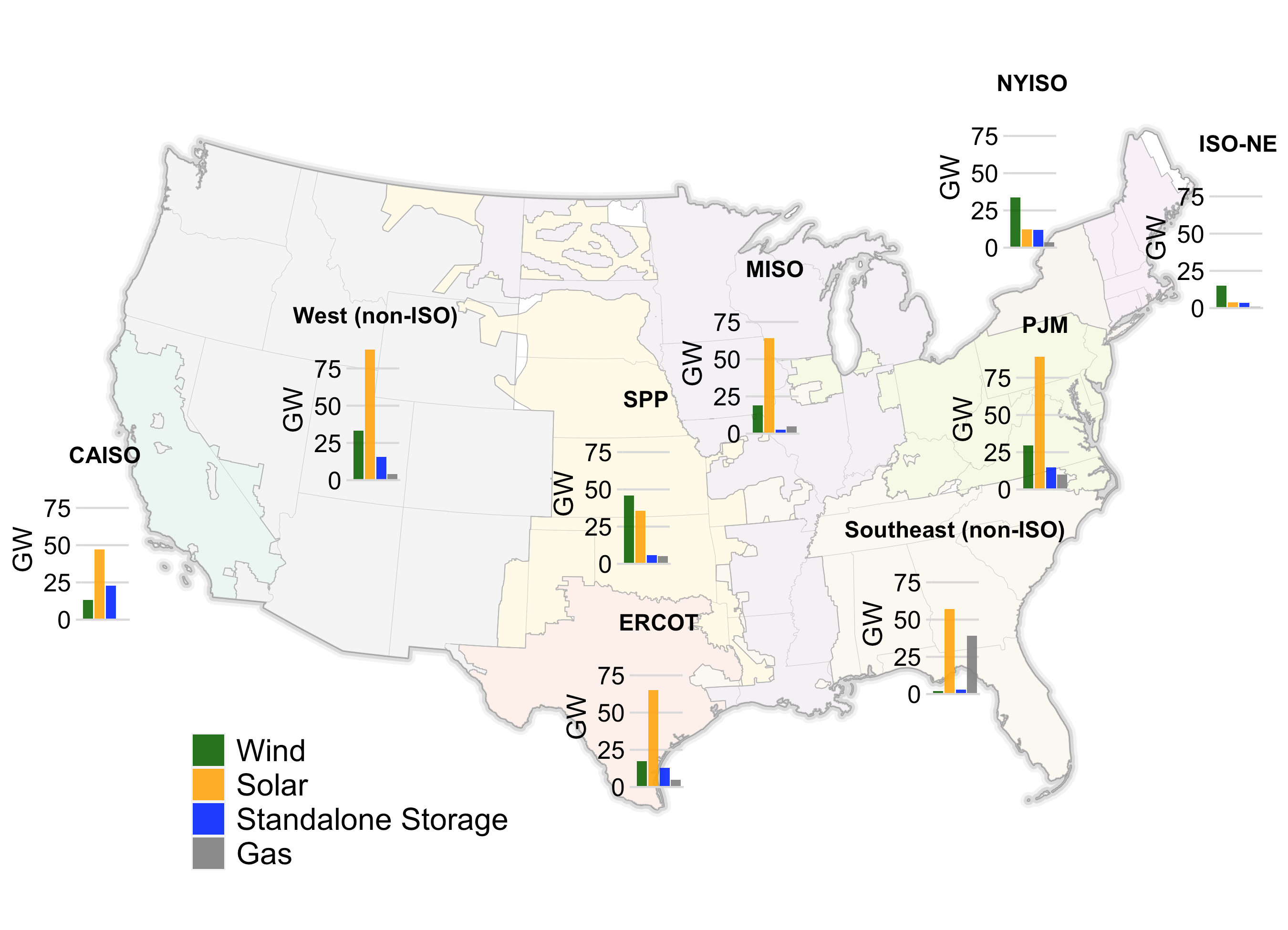 Hybrid power plants are of growing interest, especially solar paired with storage. At least 159 GW of the solar in the queues is proposed as a hybrid plant (34% of all of the solar in the queues), followed by 13 GW of wind with storage (6% of all wind in the queues). An estimated 112 GW of battery capacity is proposed in hybrid configurations with generation, representing 55% of all storage capacity in the queues. Interest in hybrids is most prominent in CAISO and the non-ISO West, where 89% and 67% of the cumulative proposed solar is in a hybrid configuration, respectively. That trend is accelerating – CAISO saw over 15 GW of solar+storage hybrids enter the queue in 2020, compared to only 5 MW of standalone solar. 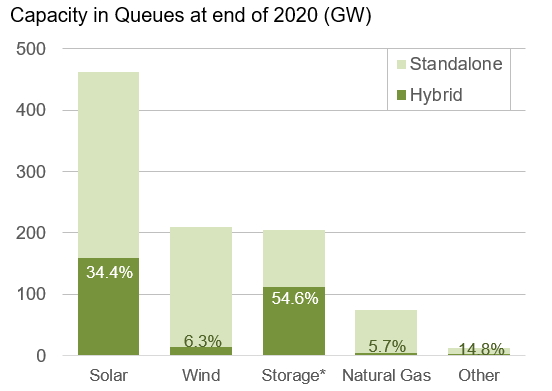 Figure 3: Proportion of capacity in queues in a hybrid configuration as of the end of 2020. *Hybrid storage capacity was estimated for some projects using known storage:generator ratios.

Of course, much of the proposed capacity in the queues will not ultimately be built. Looking back at a subset of queues for which data are available (CAISO, ISO-NE, MISO, NYISO, and PJM), only 24% of the projects seeking connection from 2000 to 2015 subsequently reached commercial operations. Completion percentages appear to be declining in recent years and are lower for wind and solar than for other resources. Additionally, wait times are on the rise: in four ISOs, the typical duration from connection request to commercial operation increased from ~1.9 years for projects built in 2000-2009 to ~3.5 years for those built in 2010-2020. There are growing calls for queue reform to reduce cost, lead times, and speculation.