Solar professionals report that the assumed useful life of PV projects now exceeds 30 years in most cases, with OpEx dropping by 50% over the last decade

The expected useful life of utility-scale photovoltaic (PV) projects has increased over time, while anticipated operating expenditures (OpEx) have decreased, according to new research from Berkeley Lab. Findings are detailed in a new paper: “Benchmarking Utility-Scale PV Operational Expenses and Project Lifetimes: Results from a Survey of U.S. Solar Industry Professionals.”

Useful life and OpEx are important, but sometimes overlooked, drivers of the levelized cost and profitability of utility-scale PV plants. This paper draws on a survey of U.S. solar industry professionals and other sources to clarify trends in these cost factors. Key findings include:

Solar project developers, sponsors, long-term owners, and consultants have increased project-life assumptions over time, from an average of ~21.5 years in 2007 to ~32.5 years in 2019. Current assumptions range from 25 years to more than 35 years depending on the organization; 17 out of 19 organizations from which data were obtained use 30 years or more.

Across 13 sources, the range in average lifetime OpEx for projects built in 2019 is broad, from $13 to $25/kWDC-yr. Operations and maintenance costs—one component of total OpEx—have declined precipitously in recent years, to $5-8/kWDC-yr in many cases. Property taxes and land lease costs are highly variable across sites, but on average are—together—of similar magnitude.

Levelized Costs Would Be 43% Higher Absent these Advancements

The levelized cost of energy (LCOE) of utility-scale PV projects fell from an average of $305/MWh for projects built in 2007-09 to $51/MWh for those built in 2019. This reduction was largely due to lower up-front capital expenditures (CapEx), but about 9% ($22/MWh) was due to improvements in project life and OpEx. Had project life and OpEx not improved, LCOE in 2019 would have instead averaged $73/MWh—43% higher. 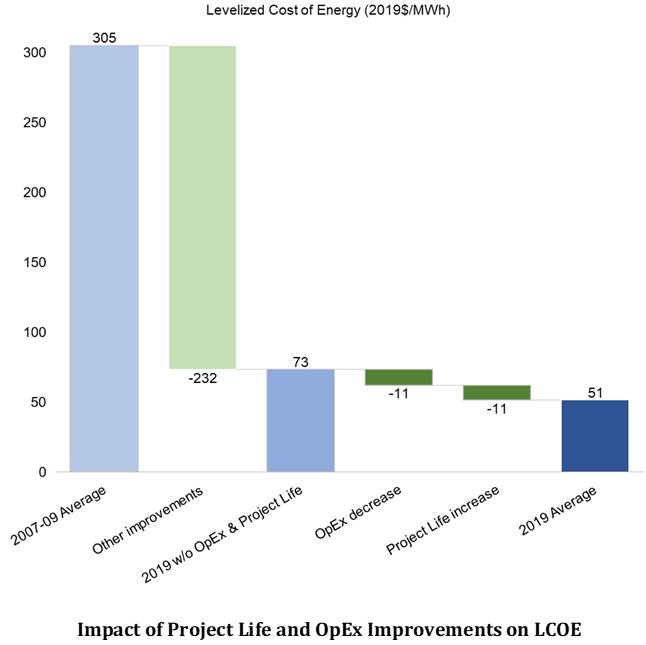 Given the limited quantity and comparability of previously available data on these cost drivers, the data and trends presented in this paper may inform assumptions used by electric system planners, modelers, and analysts. The results can also provide useful benchmarks to the solar industry, helping developers and assets owners compare their expectations for project life and OpEx with those of their peers.

The Lawrence Berkeley National Laboratory paper on project life and OpEx trends can be found here. The research was funded by the Solar Energy Technologies Office of the U.S. Department of Energy.