An unexpectedly cloudy day can cause solar generation to dip below expectations, and in consequence, other generators will need to compensate with additional output. One possibility is that fast acting gas combustion turbines would fill this generation gap, and while this is suitable solution from a reliability standpoint, a more fuel efficient combined cycle generator might have been able to compensate for the reduced solar output given enough prior warning. This is an example of the cost of a solar forecast error, that is, a less than optimal set of generators meets demand. 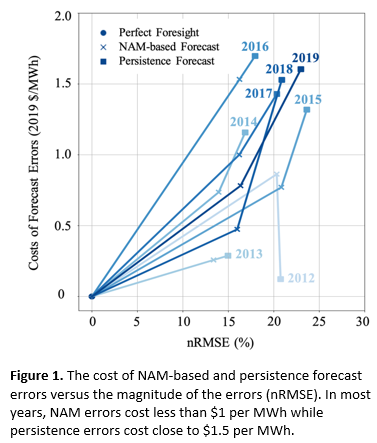 A new study from Berkeley Lab, appearing in the journal Solar Energy, examines the cost of solar forecast errors at over 600 plants from 2012 through 2019 across five major electricity markets in the United States. The study looks at two types of forecasts, a simple “persistence” forecast approach, in which today’s solar profile is expected to repeat exactly tomorrow, and a publicly available numerical weather prediction forecast (the North American Mesoscale Model, or NAM). The study uses local hourly prices at each plant location, and hourly profiles of actual generation that were developed independently from the NAM weather model and were debiased based on recorded generation at each plant and across each region.

The study found that the average cost of the forecast errors using the NAM method was $1 per MWh or less in all years save 2016, in which it was $1.5 per MWh (see figure 1). In contrast, in most years, persistence-based forecasts had higher costs, close to 1.5 $/MWh in all years. This shows that even the use of a simple, publicly available, forecasting technique like NAM can provide value by reducing the cost of forecast errors. Still, forecast error costs were low relative to typical whole electricity prices of roughly $20 to $40 per MWh (depending on the year).

One concern about solar forecast errors is that their costs might grow as a larger portion of total electricity generation derives from solar generators. This concern is simply based on the idea that a portion of solar errors are regionally correlated and thus additional solar deployment could lead to larger absolute forecast errors which might be more costly to address.

Underneath the broad regional trends described above, however, there was substantial variation in the costs of errors across individual plants and across years. Additional details on regional, plant-level, and temporal variation in error costs can be found in the full paper.

What is the Value of Solar Plant Participation in Day-Ahead Markets?

We further examined whether there was value for solar plants to participate in day-ahead markets even after accounting for the costs of forecast errors. Though most plants are not true ‘merchant’ plants (i.e., most plants sign some form of a long term purchase agreement), we can use wholesale prices to determine the system value that is provided by solar plant participation in both day ahead and real time markets (as opposed to only real-time market participation) by using the publicly available NAM forecasts to drive day ahead bidding. The study found that, on average, there was a modest value for participation in day ahead markets, even after accounting for NAM forecast errors. This value varied by year and ranged from -0.5 to 5.2 $/MWh.

What About the Cost of Errors in the Future?

This study provides a foundation which can be used to set future expectations and check forward-looking models. Given that context, the study found that through 2019, solar error costs remained modest even though solar penetration increased dramatically in California. This finding can serve as a starting point in forward-looking studies.

However, outstanding questions remain. In particular, how will forecasting error costs change as solar deployment increases to previously unseen levels or as storage is integrated into the grid in large quantities? Additionally, this study did not investigate the costs of forecasting errors for solar+storage hybrid plants, a type of plant expected to be deployed in growing numbers in the next few years.

If you have any questions, please contact Dev Millstein, DMillstein@lbl.gov, at Lawrence Berkeley National Laboratory.