The growing size of wind turbines has helped lower the cost of wind energy to the point that it is economically competitive with fossil-fuel alternatives in some locations. But can turbines continue to scale in the future, or are they running into physical or logistical constraints? Recent research published in the journal Nature Energy suggests that land-based wind turbines and, especially, offshore turbines have room to grow, offering the promise that this already-mature energy technology will see still lower costs in the future.

The new study summarizes a global survey of 163 of the world’s foremost wind energy experts to gain insight into the possible magnitude and sources of future wind energy cost reductions. It represents the largest-ever ‘expert elicitation’ survey on an energy technology, and was led by Berkeley Lab, NREL, University of Massachusetts, and participants in the IEA Wind Technology Collaboration Programme Task 26.

According to the wind experts, larger turbines are on the horizon, enabling further reduction in the cost of wind energy on land and offshore. Turbine design will continue to vary by market and project site, but the experts forecast continued evolutionary growth in average turbine size on land, and more revolutionary growth offshore. Figure 1 depicts the historical growth in land-based turbine size in the United States, while also presenting survey-based average forecasted turbine size in North American in 2030. Figure 2, meanwhile, shows historical global offshore turbine size trends and survey-based average forecasted size globally, also in 2030. 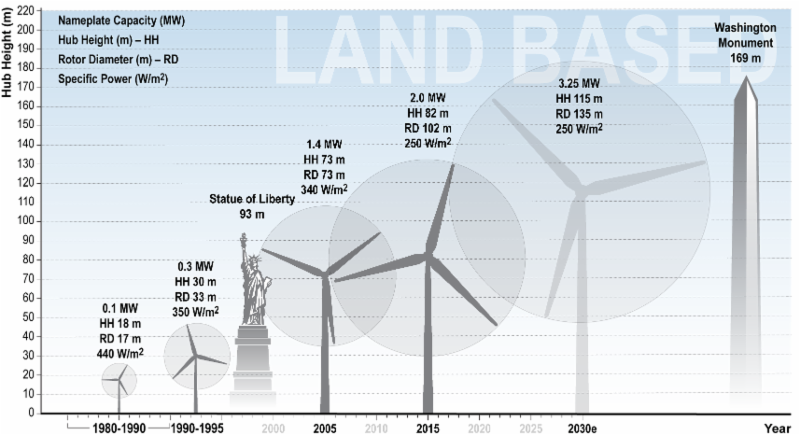 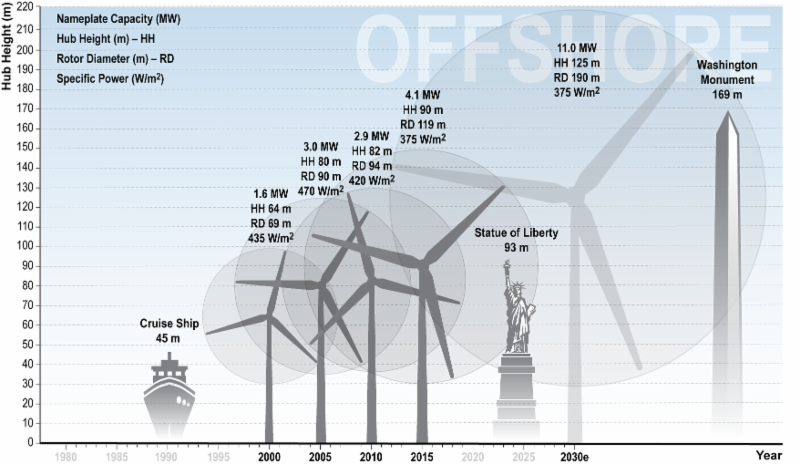 The story of wind power is a story of machine size. From the beginnings of the U.S. industry in California to the present, the typical generation capacity of wind turbines deployed in the United States has increased 20 fold, from the 100 kW turbines typical in the 1980s to the 2 MW machines common today. Modern turbines feature 80 meter towers, and 100 meter rotor diameters: big enough to sweep an area 50 percent larger than an American football field.

With that scale has come both decreased up-front costs (partly through economies of scale and reduced balance-of-plant costs on a per megawatt basis) and increased turbine performance (through taller towers and longer blades). In combination, these trends have reduced the levelized cost of wind energy (LCOE).

Of course, turbine size varies by market, by wind resource and site topography, and by whether turbines are deployed on land, or at sea. There is no single ‘optimal’ turbine across all sites and, as technology has developed, turbine designs have also shifted.

As documented in the DOE’s 2015 Wind Technologies Market Report, the most notable recent trend in the United States on land has been towards longer blades and the resultant increase in swept rotor area (also see Figure 1). Yet average turbine generator capacity has stayed roughly the same since 2011. In other words, companies are attaching bigger blades to the same generator size, thus increasing energy capture. And because the additional up-front capital cost of doing so is modest, the overall trend has been towards a lower overall levelized cost of wind energy. The ratio of generator size to rotor swept area is known as ‘specific power,’ and is an important and underappreciated development in wind technology.

Though the new generation of low specific power machines was originally designed for lower wind speed sites, they are now being deployed in some of the windiest parts of the country. This is enabled by the low-turbulence winds often seen in the U.S. interior and by improved turbine materials and control systems. The result: the average capacity factor of recently built projects exceeds 40%, a level unheard of even a few years ago (Figure 3).

These trends are, in part, related to the limited number of developable high-quality wind resource sites that exist in much of densely-populated Europe, constraints that support the deployment of turbines that maximize energy production from every single turbine pad. The tall and high capacity turbines that meet these needs do not yet generally feature the outsized rotors (and low specific power) that have become common on smaller turbine platforms. As design and logistical challenges to longer blades are addressed, this may change.

Offshore, the wind sector is less mature. Nonetheless, the 1.6 MW global average size of turbines installed in 2000 has given way to an average size of more than 4 MW in 2015 (Figure 2). Hub heights and rotor diameters have similarly increased, with a modest trend towards lower specific power and with a resultant increase in capacity factors (Figure 3, also see here). 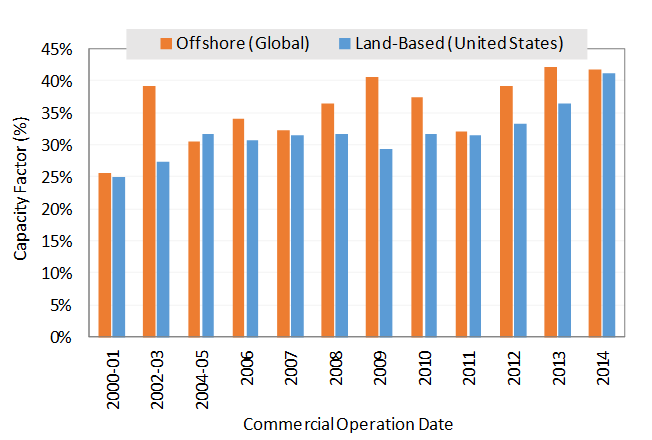 Offshore turbines will continue to grow, with most projects in planning today expecting to use turbines in the 6-8 MW range. In part this is due to the easier logistics of transporting massive components by sea. But, in addition, the non-turbine costs of building offshore wind plants (and especially the cost of the foundation and installation) are enormous. Minimizing those costs on a per-MW basis through growth in turbine size is a decided advantage.

With each turbine design evolution, there have been questions about whether the technology has hit its limits: whether physical scaling laws or transportation and other logistical challenges mean that the ‘optimal’ turbine size has been reached, and that additional size will just add costs. And as a relatively mature technology, one might wonder how much more cost can be squeezed out of the system through continued growth in turbine size.

According to the 163 wind experts surveyed in the Nature Energy article, still-larger turbines offer promise, and will be regularly used by 2030.

For land-based applications in North America (Figure 1), the experts anticipate evolutionary growth in average turbine generator size (2 MW in 2015 to 3.25 MW in 2030) and average hub heights (82 meters in 2015 to 115 meters in 2030). Rotor diameters also increase, keeping specific power at the current low level already seen in the United States. European projects are expected to feature, on average, bigger generators (3.75 MW) and witness a strong reduction in specific power, converging with those in North America. Overall, these trends are consistent with recent commercial product offerings just being released by many of the major turbine manufacturers.

Offshore wind is expected to see more dramatic changes, with 11 MW turbines being regularly deployed in fixed-bottom applications by 2030 (Figure 2). Turbines of this scale are expected to feature hub heights averaging 125 meters and rotors averaging 190 meters in diameter, making a swept area more than 5 times the size of a football field. Average specific power is forecasted to remain at current levels.

Offshore turbines this big go well beyond current commercial product offerings, which largely focus on turbines 8 MW and below, but are consistent with the plans of major manufacturers to have prototypes of 10+ MW turbines by 2020. Turbines deployed in North America are forecasted to be somewhat smaller than in Europe (9 MW), perhaps reflecting the fact that North America is currently lagging Europe in offshore development.

The survey also asked how reductions in up-front capital costs (CapEx) and operating expenses (OpEx), increases in capacity factors and turbine design life, and improvements in the cost of financing would affect energy costs.

For land-based wind, experts anticipate that LCOE reductions will be primarily influenced by improvements in capacity factors and CapEx. The taller towers and larger rotors expected to be deployed by 2030 are consistent with the relative importance placed on capacity factor improvements. Achieving lower capital costs while simultaneously increasing turbine size, meanwhile, will require continued design, engineering, and manufacturing advancements.

For fixed-bottom offshore wind, reduced upfront costs are seen as the single most-important driver for LCOE improvements to 2030, with capacity factor increases of somewhat lesser significance.  Larger average turbine generator capacities will reduce the high (per-MW) cost of substructures, foundations, and installation experienced offshore. As a report by NREL puts it, “Fewer larger sized turbines minimize the balance-of-system requirements (i.e., less substructures and other infrastructure required to achieve the same project size).” A recent report by BVG Associates, meanwhile, highlights the positive impact of turbine generator size, hub height, and rotor length on not only CapEx, but also OpEx and capacity factor; that report cites a possible 18% reduction in LCOE between 2014 and 2030 based on turbine size alone.

Lower energy costs are not the only benefit from bigger turbines. Recent research shows that machines with low specific power (and taller towers) can boost the value of wind energy in electricity markets, since they have steadier output. Work by and for the U.S. Department of Energy, meanwhile, shows how larger turbines and turbine design advancements might unlock new areas for wind development, both on land and offshore, that would otherwise be deemed unattractive.

Is there Room for Upside?

The wind industry has a history of under-predicting the growth rates of turbines. Even the experts in our study predict essentially the next step up from current common practice, as their median guess. Are gains beyond that possible? At some size, the cost of a larger turbine will grow faster than the resulting energy output and revenue, making further size increases uneconomic. But will clever engineers continue to find ways of avoiding such a plateau?

The median response from the survey masks the fact that not all experts agree on future turbine size. As shown in Figure 4, some experts anticipate that smaller machines will be more common, while others expect that still-larger turbines will dominate the market.

Those really large turbines will require fundamental technological advancements, and thus a need for public and private R&D. The U.S. Department of Energy is looking into ways to help enable larger turbines, on land and at sea. The EU-funded UpWind and, more recently, INNWIND.EU projects are emphasizing turbines up to 20 MW in size. Floating offshore turbines open a new realm of possibilities, with their own engineering challenges and opportunities. More speculatively, a team of researchers led by University of Virginia (with funding from the U.S. Department of Energy) is studying the potential for turbines with blades large enough to power 50 MW offshore machines; still others are exploring ‘high-altitude’ wind, essentially flying wind turbines tethered to the ground.

As is often the case with R&D, the original vision may or may not ever come to full fruition.  But the scientific advancements will likely bleed-into the commercial wind sector regardless, helping to achieve the potential benefits of turbine scale in reducing costs, enhancing the market value of wind energy, and opening new areas for possible wind development.

The survey was conducted under the auspices of the IEA Wind Technology Collaboration Programme. Berkeley Lab’s contributions to this work were funded by the U.S. Department of Energy’s Office of Energy Efficiency and Renewable Energy.

The Nature Energy article can be found here.

A full report on the survey findings is also available, as are presentation-style slide decks summarizing the results; a pdf version of this blog is also available. All of these files can be downloaded on this page.